Lucia: Guardian of Frost is one of the Guardians. She is the fifth unlocked Guardian you can get without level required and by completing the Raid Event The Ice Queen Returns from the Magical or Legendary Chests.

Bio: Imbued with the power of winter, Lucia pierces enemies with frozen daggers and freezes them mid-flight.

Availability: participate the Raid Event The Ice Queen Returns and get a chance to recieve this Guardian as a Reward from the Magical or Legendary Chests.

As the Ice Queen’s only daughter, Lucia grew up alone, surrounded only by the Queen and her minions. As the sole heir to her mother’s throne, Lucia spent her days under the Queen’s icy scrutiny, training relentlessly to win her mother’s approval.

As she grew, more and more stories about the Ice Queen’s conquests reached Lucia’s ears, and a chilling unease slowly filled the young princess’ heart. Now, the time has come to choose her fate: should she stay to make her mother proud, or follow her heart to join the forces of justice…?

*It's similar or may be being adopted to Uncle Ben's quote. Click here to hear it. 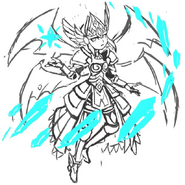 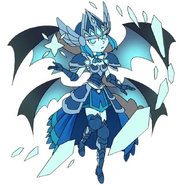 Incomplete artwork with old outfit design
Add a photo to this gallery
Retrieved from "https://everwing.fandom.com/wiki/Lucia:_Guardian_of_Frost?oldid=9424"
Community content is available under CC-BY-SA unless otherwise noted.